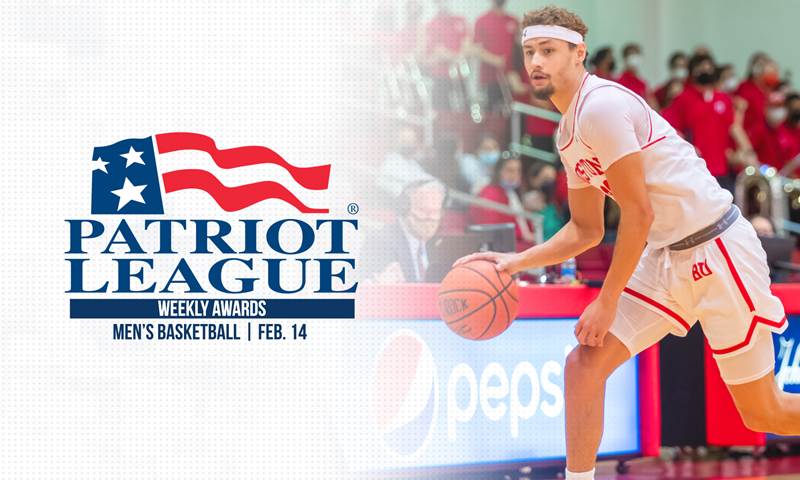 McCoy collected GEICO Men’s Basketball Player of the Week for the second time this season and the third time in his career after averaging 19.0 points, 7.5 rebounds and 4.0 assists to lead the Terriers to a 2-0 week with wins over Army West Point and American.

Luc claimed GEICO Men’s Basketball Rookie of the Week after averaging 17.7 points, 5.3 rebounds, 2.7 assists and 2.0 steals to lead the Crusaders to a 2-1 week with wins over Loyola Maryland and Bucknell.

The Patriot League men’s basketball players of the week are selected in a vote by League media members and each school’s sports information director, who are not eligible to vote for their student-athletes.

PATRIOT LEAGUE MEN’S BASKETBALL GEICO PLAYER OF THE WEEK
Javante McCoy, Boston University, Gr., G, Milwaukee, Wis./Phillips Exeter Academy (N.H.)
*McCoy averaged 19.0 points, 7.5 rebounds and 4.0 assists while shooting 56 percent (15-for-27) from the floor to guide the Terriers to wins over Army West Point (75-74) and American (85-67).
*The League’s preseason player of the year finished with 13 points, nine boards and six assists, including a last-second feed on what proved to be a game-winning layup and free throw against the Black Knights.
*Against American, McCoy scored a game-high 25 points on 9-of-14 shooting, marking his sixth game of 20 or more points this season.

PATRIOT LEAGUE MEN’S BASKETBALL GEICO ROOKIE OF THE WEEK
Kyrell Luc, Holy Cross, Fr., G, Dorchester, Mass./Brimmer & May
*Luc averaged 17.7 points, 5.3 rebounds, 2.7 assists and 2.0 steals per game to help Holy Cross go 2-1 with victories over Loyola Maryland and Bucknell. He also shot 87.5 percent from the free-throw line in three games.
*The five-time rookie of the week scored 18 points and grabbed seven points in a 68-64 win against Loyola Maryland on Wednesday before finishing with 14 points and a career-high six assists in a 78-72 win at Bucknell on Saturday.
*He scored a team-high 21 points and grabbed five boards in a loss at Colgate last Monday.

Nic Lynch, Lehigh, Sr., C, Seattle, Wash./Seattle Prep
*Lynch averaged 15.0 points and 6.0 rebounds while shooting 60 percent (12-for-20) from the field in Lehigh’s losses against Colgate and Lafayette. He posted a team-high 18 points and added nine rebounds against the Raiders.

ABOUT THE PATRIOT LEAGUE
The Patriot League is in its fourth decade of academic and athletic achievement, continually demonstrating that student-athlete can excel at both academics and athletics without sacrificing high standards. The Patriot League’s athletic success is achieved while its member institutions remain committed to its founding principle of admitting and graduating student-athletes that are academically representative of their class. Participation in athletics at Patriot League institutions is viewed as an important component of a well-rounded education.